Tim was invited to go fishing on the ocean with his good friend and a bunch of his friends.  Being a lover of fishing from way back, he was excited to have a new fishing adventure for the first time on the ocean in Costa Rica while practicing his Spanish with all of the new Tico friends he would make on the ‘boat’ for the day!

The night before, as he prepped for the early morning gathering of all of the fishermen, he got his tackle box, rod and reel ready to go.  He got up early to pick up his friend, and then proceeded as a ‘taxi’ to drop by the house of 6 of 25 the other guys before they headed off to the ocean, full of anticipation of catching ‘the big one’!

Late that evening, they arrived back at our place with coolers full of the day’s catch – there were all different kinds of fish, none of them worthy of a fish story, but delectable eating of red snapper and more, none-the-less.  After laying everything out on a tarp and really getting a good look at the day’s accomplishments, they began dividing the haul and then the stories began!

I think the best story for all of the Ticos, and the funniest new experience for Tim, was the difference in how they fish vs. what he’s used since he was a boy.  It didn’t matter if he was fishing in the stream, river, lake or ocean, he had the proper gear to reap the most benefit for his days effort!  Boy, was that different than what the rest of the guys carried onto the boat!  As Tim was rigging up, they watched in wonder as they pulled their fishing line out of their pockets, wrapped the line around the palm of their hands, and threw it over the side of the boat – there was barely any room for Tim to manage his fishing pole as they brought fish after fish on board!  Of course, this adventure was still more enjoyable than his very first invitation by the same Costa Rican …. Tim and his friend Kent, crammed in the ‘not really a back seat’ of his pickup, squished up for 4 hours of driving to finally get to a river that had no fish in the territory of an indigenous friend.  All of this was coupled with visiting every relative along the way for the purpose of introducing them to the family!  No fish was brought home that day!!!!

The rest of this ocean fishing day was a good day – the Ticos were thrilled with their catch, and it was a great experience for all involved!  They learned a little English, Tim learned a lot more Spanish, and now they are all good fishing buddies!  We’ll see how Tim does with his fishing line next time! 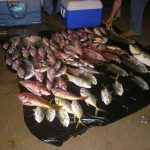 As Unto The Lord

Help Us To Help Others